Book Review: A Work in Progress by Connor Franta 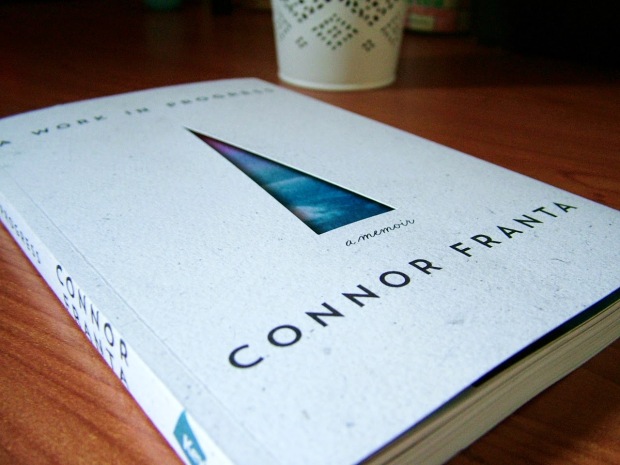 Keywords Press understands something that academics, librarians and average consumers do not:

People judge books by their covers.

I strolled through Walmart to waste time and eventually stumbled into the book section. “Stumbled into” may sound accidental, but there is nothing accidental about finding me in the book section. From experience, Walmart seems to carry only three types of books: books for children, faith-based books designed to prey upon the biblically illiterate, and steamy, poorly written sex novels.

I found Connor Franta’s book A Work In Progress and saw mysterious cover art. The title seemed to connote deep introspection and reflection upon personal growth, and the triangle-cut, pop-color design solidified my instant gut feeling: I will buy this book, I will not read the description, I will choose to feel absolutely no shame, and nothing will reverse this split-second decision.

Connor Franta, as I quickly found out, maintains a Youtube channel with weekly content and millions of subscribers. His book describes a childhood of creativity, formative years spent with supportive parents, sibling relationships and dynamics, and a life lived in the rural Midwest. Do not fear the 212 pages- his scenic photography fills half the book in full color.

Franta writes several feet below surface level, but nothing so abstract that average high school students would miss:

When in a relationship, find the “person worth ignoring your phone for.”
When using social media, avoid “measuring self-esteem by the numbers” of likes or comments.
When taking risks, “allow yourself to [take] them and add your splash of color to the world.”

I particularly appreciate his section on labels and stereotypes. From my experience, teachers and school counselors told us to avoid labeling each other – one time – in the 6th grade – but never again. Labels provide a “launch pad for judgments” that deter us from following our ambitions. He certainly has a strong sense of self, an identity based on discovering himself rather than hearing about himself from others.

According to Connor, nothing “aids or abets depression” as powerfully or as permanently as “being left alone with negative thoughts.” The depression throughout his late teens came not from being gay, but from holding it within and never expressing himself, from living a double life. Actual freedom came in telling others about his true self.

Religion – a theme entirely absent from the book – probably played a significant role in that struggle. For example, Connor attended a Catholic K-8 school; to what extent did his formative education instill in him values contrary to his sexuality? He never mentions his parents’ beliefs, other than that they immediately accepted his orientation; to what extent did his parents’ beliefs influence his long-term closetedness? What are his beliefs, and how do they inform his homosexuality? On this subject, the book left me wanting.

He alternates between cheeky sections that, not ironically, read like a Youtube video and more rich, mature prose of introspection and conviction. He shifts to the latter for second half of the book. Franta herein follows his own rule: be yourself. His writing style reflects his own experiences, creativity and passions, rather than reflecting someone else. Connor admittedly doesn’t speak “as some wise old wizard on the hill,” but as a “twenty-two year old with . . . much left to explore and learn.”

Middle school or High school students will enjoy this book for its levelheaded analysis of everyday teenage life and for its brevity. His instantly applicable insights into teenage relationships, long-term loneliness, seemingly inescapable depression, social anxiety and unrestricted creativity will help readers take inventory on their lives and reflect upon their own journey.