I’m pro-life. “Unplanned” is not worth seeing. 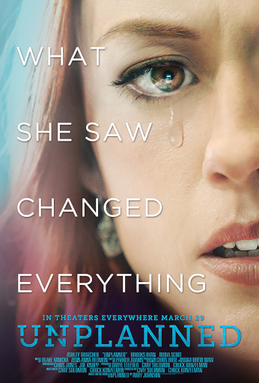 Put aside production quality failures and Unplanned still does not work. Forget issues with lighting, camera angles, editing, pacing, colorization, any of it. Disregard whatever expectations you have of cinematography — because, let’s be honest, directors Cary Solomon and Chuck Konzelman of God’s Not Dead I & II fame are not trying to make a beautiful or sophisticated film. Meet Unplanned where it is at, which is not a film but a message-movie. Let’s focus only on the message.

I’m going to be generous here.

The argument against abortion in Unplanned is threefold. First, abortion looks gross. Visually you cannot watch it happen. To watch an abortion is to watch something bloody, gory, something alien to our sanitized suburban lifestyles. When you see an abortion on-screen you go, “Eww, gross.” It evokes a negative mind-body reaction. Second, the administration at Planned Parenthood is bad. Planned Parenthood makes profit-maximizing decisions and does not treat their employees well. They compare fetuses to french fries and soda, they speak in strict subject-predicate syntax and never use the passive voice, and they arbitrarily reprimand their employees (and later SLAPP sue them). Third, some people who stand at the Fence on Saturdays are good people who want to support women and provide them other options than having an abortion. Other people at the Fence are mean, but these certain ones treat women with respect and genuine kindness.

Grossness, Meanness, Kindness. These reasons can motivate any given person to become pro-life. I’m not denying that. And they come from Abby Johnson’s personal memoir. I see no real reason to doubt that these three reasons were significant in her conversion to the pro-life cause. (Though other aspects of the narrative are disputed). But they are unconvincing beyond sheer emotional appeal. Unfortunately that was not the case for the pro-choice arguments. As Abby becomes a Planned Parenthood advocate the audience is treated to many of the arguments that convinced her: (1) Women should have the right to choose, (2) Many women are in vulnerable living situations and can’t justify having a child, (3) Many teenagers are too young to responsibly raise children. These arguments can be easily diffused. Watch this: (1) Yes, but choices must be made in the moral-legislative context of democracy, so ultimately, we all must choose what we want our society to look like, whether pro-choice or pro-life. (2) Yes, which is why adoption matters. (3) Yes, which is why adoption matters.

I understand that the arguments are more complicated than this. But these basic argument-objection conversations were 100% absent from Unplanned. The movie didn’t go over any of them, at all. The only ones it attempted to address were that the fetus is a baby and that abortions are medically unsafe. (Neither of these are communicated fully in language, but they do get visually gruesome scenes). However, both of these objections are incorrect given the movie’s own reasoning. The movie depicts a 13 week fetus struggling against an abortion — this is Abby’s big conversion moment — but according to the oft-cited report from the Royal College of Obstetricians and Gynecologists, the fetus cannot feel pain until 27 weeks, the third trimester, at which point most States ban abortion. The other point, that abortions are medically unsafe, was depicted with a young woman almost dying from a perforated uterus. However, medical complications from abortion are exceedingly rare. Honestly, let’s admit it, abortion isn’t an unsafe operation (for the woman!). Medical safety isn’t why we should reject it. We should reject abortion on other moral grounds — and anyways, if the whole argument is medical safety, then when medical science advances and abortion becomes less dangerous (for the woman!) than it already is, the argument gets even weaker.

So, Unplanned left me with a powerful emotional journey as Abby converted from the pro-choice to pro-life cause. That is an important testimony and a sign of God’s grace in her life, personally, and the power of God to transform anyone, whatever they are “complicit in,” as the movie interestingly remarks. Not “guilty for,” but “complicit in.” This is good language for discussing sin that we did not ourselves commit…

Unfortunately, Unplanned failed to say really anything else meaningful about abortion.

Notice that I have avoided mentioning the technical, formal failures in this movie. There are so many. But in order to not look like a film snob who missed the directors’ point, I’ve withheld my specific critiques. And even now I won’t say them. Just watch the movie yourself, you will immediately, and I mean IMMEDIATELY spot them.

The production failure upset me, though, because abortion is a really serious topic. I believe that abortion is killing and that in the vast majority of cases such killing crosses a moral threshold into murder, so far past that moral threshold that it ought to be outright banned in nearly all contexts. We need a ban for the good of society at large and because abortion will have no place on the Mountain of God. This is eschatology in action, that one day all of humanity “shall beat their swords into plowshares, and their spears into pruning hooks.” The scalpels, clamps and suction devices used in abortion will one day find a new use in the New Jerusalem, a use that builds rather than destroys life.

So when this movie does such an awful job, cinematically, it upset me. Poor filmmaking makes a mockery of its subject. The directors of Unplanned should have known better, tried harder, and done more with their (honestly good-sized) budget ($6m). Abortion deserves a serious film.

I left the theater not more passionate about my pro-life convictions, but less.